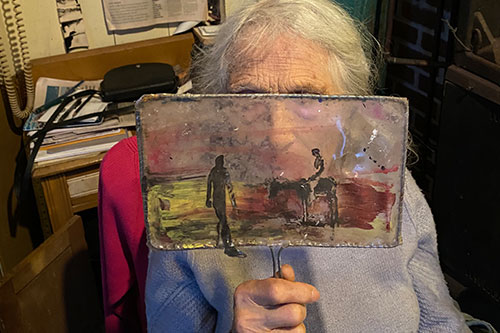 June Leaf in Mabou Since 1969, an exhibition of never before seen works by the Artist June Leaf.

June Leaf along with her partner Robert Frank moved to Mabou, Nova Scotia in 1969. They bought a house in the Mabou Coal Mines and quickly made it their primary residence. Leaf often speaks to the influence Cape Breton had, and still has on her life and her art practice. Leaf sees the world through people, her work is figuratively based always and it is the people of Cape Breton and the relationships that she built here that forever altered her life’s work.

In this exhibition you will see a selection of drawings chosen from her storage files but the core of the exhibition is of the portraits she made of the people around her. The portraits started as a desire to draw everyone in Mabou who had met Andrea, Robert’s daughter, before she died tragically in a plane crash when she was just 20 years old. Then they turned to portraits of the many people in Cape Breton who became friends and they continue to this day, with the most recent double portrait from July 22, 2022.

The drawings, beginning with the first piece she made in Mabou, First Water Faucet, give insight to the research and process to her extremely proficient career. You will see an early landscape from the Coal Mines which appears again and again in Leaf’s work. You will see a version of Robert Entered the Room, one of which was showed at The Whitney museum in 2016.

The primary study drawings for her well known Glasses sculpture will be on view, as well as many never seen before sculptures. June has been incredibly generous in opening her home and her work in preparation for this exhibition. She has a deep desire to show what Cape Breton has meant to her very prolific and influential career for over fifty years.