Dara Smith-MacDonald, born and raised in Antigonish, has been playing the fiddle for more than 20 years and now resides in Port Hawkesbury. With family roots in Inverness, she very quickly began to develop a style that is strong, lively and traditional. Dara has played for concerts, ceilidhs, and dances throughout Cape Breton, mainland Nova Scotia, Prince Edward Island, Ontario and the USA. She has performed at the Antigonish Highland Games, the Acoustic Roots Festival, Rollo Bay Fiddle Festival, KitchenFest!, and Celtic Colours. In the summer of 2019, she traveled to Edinburgh, Scotland to perform in the Royal Edinburgh Military Tattoo with the fiddle group Hjaltibonhoga based out of Shetland. For the past 16 years, she has been teaching fiddle at Colaisde na Gàidhlig / the Gaelic College and to students in her home and around the world via Skype. Dara is a musical director and a member of the Board of Directors with the Cape Breton Fiddlers’ Association with whom she has traveled to Boston and to Maxville, Ontario. Dara can often be found on stage with Adam Young, a sought-after piano player from Marion Bridge. Dara and Adam released their first CD together, The Lake Sessions, in June of 2017 and released their second album, Island, along with Brent Chaisson, in the summer of 2019. Together they were nominated for the 2018 and 2019 Music Nova Scotia, Traditional Roots Recording of the Year award for The Lake Sessions and in 2019 were nominated for ECMA Gaelic Artist of the Year. 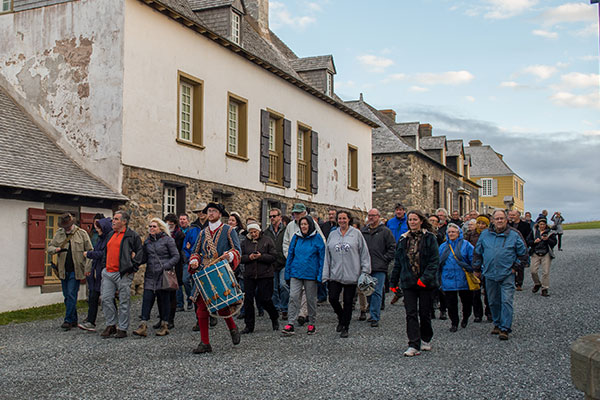 It’s a Friday night in the 18th century French fortress town of Louisbourg. Conversation mingles with music, over a meal served on pewter dishes. Singing…